My Take on Transgender Restrooms

In case you’re not LDS and don’t already know it, here’s the 12th article of faith:

We believe in being subject to kings, presidents, rulers, and magistrates, in obeying, honoring, and sustaining the law.

The problem here is that even though gay marriage is legal, a law by which we Mormons are subject, gay marriage in the church is prohibited.  And it doesn’t stop at just gay marriage, if you’re a married gay couple you’re children can’t be Mormon either [until they renounce their parents that raised them].

Racism is a sin.  Racism is bigotry.  There are no homosexual members of the church, so Mormon leaders have now justified bigotry.  Bigotry, which we’ve already established is a sin… so justified sin.  And as we all know in 2 Nephi 28:8, justified sin is a-OK in the Mormon handbook.  Something tells me that the people worried about the Mormon Apocalypse last September need to start looking at the withheld truths from within the LDS church, and not the fiction of Julie Rowe.

The above is why I have an opinion/interest of the current events in North Carolina as I feel they relate.  So this brings us to transgender restrooms. 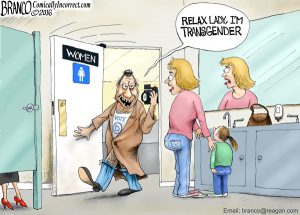 Women better steer clear of public restrooms, because every man is going to dress as a woman so they rape girls in public bathrooms across the country.  Since we’re such a male dominated society (feminists better not read this part), let’s just go ahead and make it official and change the name of October 31st from Halloween to Women’s Restroom Appreciation Day.   It’s going to be an epidemic!  Hell, it’s going to be safer for women to use the men’s room, although to be politically correct in the men’s room, women will still need to follow proper urinal etiquette and abstain from washing hands.  North Carolina and 400,000 angry bigot Target shoppers are going to set the country straight.

My opinion (you know, since this is my blog and you’re here reading it)?  Restrooms should be unisex with only individual stalls that have doors from floor to ceiling.  I could really care less if there’s a woman in the stall next to me doing her business or not.  I want to get the hell out of any and all public restrooms as quickly as possible.  Thinking about it, if my wife’s in the stall next to me I might stay and chat a bit.  Can you imagine the fun-filled vacations loaded with the family edition of Battleshit invading restrooms across the states?  Thankfully, I think the ugly disgust looks from women to men upon seeing a man walk out when he didn’t wash his hands would make us all a little cleaner.  Further, men’s rooms themselves probably (no facts to back this up) would be far cleaner and less likely to be vandalized than they are now.  As for women’s restrooms… if you think men will be dressing up to rape women in bathrooms anymore than they are now, YOU have issues and YOU should probably just avoid public restrooms altogether.  Therefore, YOUR opinion, which is part of the loud minority, isn’t any more important than the quiet majority.  A year ago this story was posted and is somehow going viral as an example of the predictable forthcoming bathroom rape epidemic.  My sister-in-law touted this bullshit article as “beautifully written”, as it was somehow relevant to the ongoing news of today.  Rape is wrong, no matter where, how and who.  There is no explanation or justification needed.  Rape education, yes; blog articles that have no relevance to the topic, no.  For some reason, a significant population of women believe that most men have been bred for sexual perversion like pit bulls were once bred to kill.  I think the cartoon above paints that picture pretty vividly, which doesn’t say much about what women think of their male counterparts.  In fact it’s quite insulting, but I’m sure the vast majority of the male population could care less to say/do anything about it.  Newsflash: [most] people are inherently sexual, but not all men are sexual predators.  I’ll go on a limb and say 99.9% of us men are NOT sexual predators.  Further, transgender bathrooms have NOTHING to do with rape, no matter how us perverted Americans (men and women alike) want to make that connection.

Regardless of whether this silly law in North Carolina is upheld or not, there is absolutely no way to police and enforce it, unless this is North Carolina’s way of creating new jobs; can you see the kids lining up for that one?  I always dreamed of becoming a bathroom cop! But maybe this has been the plan all along because there would be no better way to identify a sexual predator than with the job application of a bathroom cop — previous experience: Facebook.  And if you think North Carolina is the only regional area to implement stupid, unenforceable laws, checkout throwing a snowball in Rexburg, Idaho sometime.  That’s right folks, throwing a snowball in Rexburg, Idaho is illegal!  And who was the last kid in Rexburg carted off to jail for violating that law [rhet]?  Oh wait, I guess all kids nowadays spend their snow days inside on their cell phones, ipads and playstations.

If this is really a problem for the North Carolinians (yes, I looked that word up) and Target shopper bigots, you’d think these same people would be less worried about birth certificates and bathrooms and push to legalize prostitution.  Give these “sexual predators” a place to get their rocks off in a safe, controlled environment and maybe public restrooms could be the place you’ve always dreamed of.  At the same time, maybe you’d pay less in taxes to lockup these so-called sexual predators and collect taxes from them to help pay down that $107.5 billion North Carolina debt.  Everybody wins!  But we all know the North Carolina debt isn’t important enough to fix at the expense of human morals; you know those morals like drinking alcohol and smoking cigarettes that you CHOOSE whether or not to partake of, which taxes go toward that state debt.  But I’m going to save my prostitution rant for another day (because it doesn’t apply to just North Carolina).

Professional firefighter since 2008 and web developer since 1999. Husband, father, musician, writer, Scouter... I'm the swiss-army geek in your back pocket.